It took longer than we expected but here it is. Since RC1 we’ve fixed a lot of bugs and RC2 is way more stable and almost ready for the final release.

We’ve also added a new project generator, and now have some plugins for Visual Studio, Qt Creator and Eclipse that allow to create projects and add addons from inside the same IDEs.

There is also support for Qt Creator in linux, windows and osx with project files that are completely multiplatform. Qt Creator substitutes Codeblocks which we won’t support anymore in windows or linux.

You can find a test version of the downloads and setup guides in:

Indeed that’s a full test version of the site and we’ll be updating the documentation and other sections during the following days and then merge that in the main site for the release.

You can download the new packages from there and also check the new guides for the different platforms which include instructions on how to install the plugins in the IDEs that support them.

Any bug report about OF itself, the project generator, the IDE plugins and the site will be really helpful to finish the release.

You can report bugs for openFrameworks itself in:

For the project generator in:

and for the site:

I’ll also upload the source code for the different IDE plugins during the following days and post links to the corresponding repositories.

Thank you for helping test the 0.9.0 release!
Arturo

I love that you can jump right into the project directory now right from the generator. Would be even cooler though if there was a button that would allow you to open the project right after you created it. Maybe something like this: 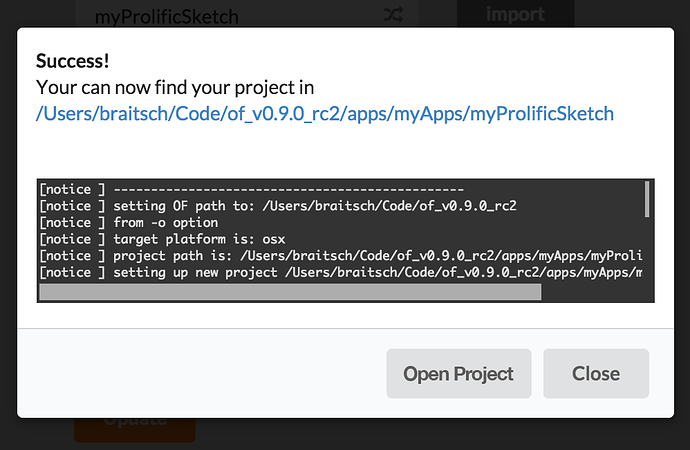 Awesome work though, looking forward to working with the new build.

Have the setup-scripts been updated yet? The one for Fedora is missing dependencies - can be manually fixed by

Thanks for this Arturo and team.

I’m finding that the examples for some of my favorite AddOns (e.g. ofxSyphon) are not compiling.
Where would be the right place to post those issues? Issue trackers for corresponding repositories? New individual posts on the forum?

@batchku - There were some changes which happened. I had to quickly do changes to get this to work on an app and here is a quick zip of the addon with the changes.

i tried building this with .9 RC2 under xcode 7.1 but wasn’t successful.
quite a few compilation errors. are you testing with RC2 and 7.1? 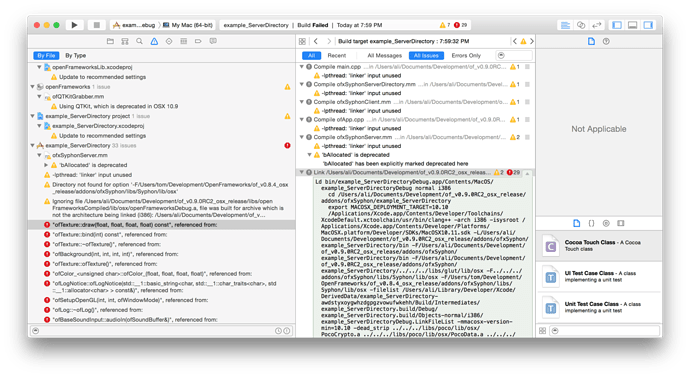 @batchku – you should definitely post an issue on the repo of the project. Also, you might take a look at the branches, you might discover other branches (for example, https://github.com/astellato/ofxSyphon/tree/of_head) which may be up to date with 0.9. some addon authors will have a “develop” branch that matches the active development.

A good example is:

where the master branch matches 0.8.4 and develop matches 0.9

@batchku Yea, it runs for me on 7.1 and RC2. Try cleaning your build and rebuilding.

@zach I looked all around at other forks as well as develop branches, no luck. It was just a change from glTypeInternal to something similar. Can’t remember off the top of my head. Unfortunately been so swamped I haven’t had a chance to even post the issue.

Update - of_head branch on main repo was fixed with these changes already. Must have missed them!

@zach for addons that break with these upgrades there are two obvious ways to deal with that,

Any thought on best practices here?

I can see benefits with both. Eg. it is easier to just work in one branch and be able to ignore other oF versions, but at the same time, I often need to work in different oF versions and keep developing addons to be used with both. I feel using option 1 runs the risk of branches becoming an addon graveyard where old addons receive no love. Often that is ok as you probably wont need / expect new features from an addon in an old project, but bug fixes and updates due to say xcode changes risk getting lost.

For those with problems with ofxSyphon in particular:

please check the nightlies today / tomorrow with regards to ofxSyphon, I think I’ve fixed this again now (it’s not in RC2, but it should be good in master)…

Checked the 20151019 nightly and it works, thanks zach. If anyone wants to use ofxSyphon with 0.9, I’d suggest using the latest nightly build until the next 0.9 RC.

Please fix the “osx” link on the download page http://openframeworks.cc/0.9.0/download/ .It is not working.
Glad 0.9.0 is released Cheers!

i’ll remove the test page so there’s no confusions